Joined Mar 12, 2003
·
196 Posts
Selling a 2001 Tacoma s runner previously owned by stroked 01srunner. It is the famous stroked 3.8l 5vzfe with a whipple 140ax supercharger mounted on top of the engine. Since buying it last November of 2014 I put about 30 miles on it. It currently has 132,000 mile on chassis and a lot less on engine. The truck was a great foundation for improvements. I has custom crank, power steering, and supercharger pulleys made. Installed dual flex a lite fans with a custom aluminum bracket. Many hours spent tinkering with it to make more power. The truck was running wonderful until I took it to the dyno to see how much power it could make. Sad to say It did not go so well. The truck runs but I think I blew a head gasket and there is a knock coming from the valve cover. I don't have any more time or money to fix the truck plus I live in California so Smogging it and driving it on public roads is out of the question. Trying to sell it as is right now. If you want more info on the truck search the site for the build history. stroked 01srunner built the truck and it is still pretty much identical to what was in the original build. I will get current pictures of the truck ASAP. Looking to get $10,000 for it.

Joined Jul 3, 2006
·
2,557 Posts
Sad thread necro here, the current state of this truck is a good example of why I don't like to sell my builds. People don't take care of stuff. 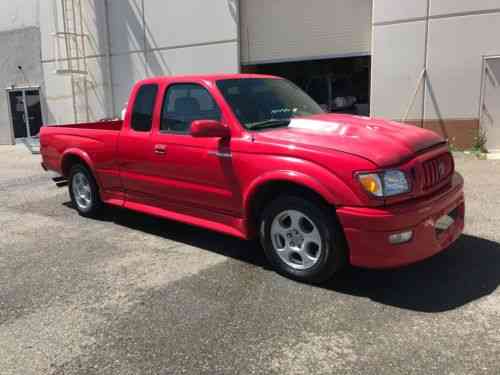 I had considered buying this SRunner back when it was for sale by the original owner, now I slightly regret not doing so.
► Show Full Signature
QA1 First 100 club "Clone me out cah me nah poppy show"
1 - 4 of 4 Posts
Join the discussion
Continue with Facebook
Continue with Google
or sign up with email
Recommended Reading
Read More
Read More
About this Discussion
3 Replies
3 Participants
Last post:
MatosTaco 1 mo ago
Toyota Tacoma Forum
A forum community dedicated to Toyota Tacoma owners and enthusiasts. Come join the discussion about performance, modifications, overlanding, lift kits, troubleshooting, maintenance, and more!
Full Forum Listing
Explore Our Forums
Off Topic Performance Interior/Audio/Electronics 1995.5-2004 Parts and Accessories
Popular Communities